Following the success of our new venue in 2019 the Garioch Heritage Centre , situated in the former Inverurie Loco Works. 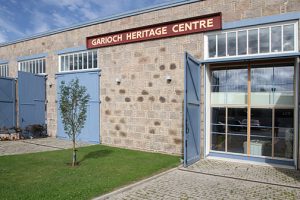 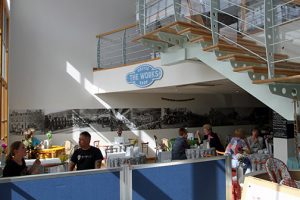 The Heritage Centre has excellent facilities: a lovely coffee shop, with on site parking and accessible to all.

We are really looking forward to exhibiting and showcasing artwork from talented artists and makers in the North East of Scotland.

Showcasing is where an Artist has a table to display/sell their artwork and having a space to show the art works are created. A really lovely way to engage with the visitors.

The Exhibition: Artists will be able  to enter up to 3 Art Works. 2 will be exhibited immediately. As a departure from previous exhibitions, Art works can be purchased and taken away during the exhibition. Sold Art Works will be replaced with work from the same artist.

Watch this space as we get nearer to the event.

The Gordon Artists’ Showcase
Inverurie Town Hall
10 -13 March 2018 11am – 5pm
Acrylic Painting, Jewellery, Photography, Ceramics, Oil Painting, Textiles
The Public met and spoke to local artists and saw them demonstrating their working practice.
Art works were on display with an opportunity to purchase directly from the artist.
Included was an exhibition in celebration of The Year of Young People with Artwork from Inverurie Academy and photography from Inverurie primary schools on display.

Another successful GAE was held in late March 2017 at Inverurie Town Hall, this year without any support from GFA or the local council, making it imperative that the show covered its considerable costs.

Our thanks must go to all the local sponsors who generously gave to awarding many people in different categories for their fine works, both young and old.

We have to give hearty thanks to everyone who volunteered their valuable time to help in all activated required to get entries, present them to the best possible way, and do all other tasks, taking in the exhibits, recording them, hanging then, returning them in due course, and invigilating them during the exhibition. But above all, we must recognise and applaud the efforts of Janet Hoper, the overall co-ordinator for a magnificent job in bringing everyone together and being superb co-ordinator. Our most grateful thanks as you have paved the way to the continuation of the GAE in the future.

Since we did cover all our costs with little outside help, it was decided at follow-up meeting that GAE remains viable, and 2018 exhibition will be held, this time headed by Jim Hatter as the co-ordinator. As he clearly indicated, we need to promote the exhibition more vigorously and to a wider audience in the Grampian area, advertise more and start fundraising from all possible sources to get funds in to cover future exhibitions more easily and with less risk.

The number of entries in 2017 was marginally down on 2016, but the quality was good. Interestingly the number of exhibits from the under 16s was almost double. The number of visitors was down, but we know that for the next few years we will have to entice more people to visit the exhibition. Again, this requires more promotion and advertising, which upfront can be expensive.

But the exhibition has a particular ethos in wanting to include the young, the talented amateur and the professional. We wish to give all an opportunity to show their work, their talent and their enthusiasm for art so that the general public also come to appreciate the effort involved.

We must pay tribute to all of the Chairs and Committees who have stepped in to keep the Exhibition running in subsequent years. Previous Chairs include Janet Hoper, Marion Reid and Ian Clark.

Seldom did it have fewer than 200 exhibits, which included watercolour, oil, and acrylic paintings, fused and stained-glass, photography, textiles and jewellery. Generous support from local organizations and businesses allowed the offer of a number of prizes. There was a steady stream of visitors who could purchase the exhibited work, including unframed images. Entry fees were kept as low as possible and a small commission of sales went to the funds to help sustain the exhibition.

Whilst in full swing, the Gordon Forum for the Arts was instrumental in organizing the exhibition as one of its major events each year. With the withdrawal of council funding, GFA now has no income to disburse and can no longer fund the exhibition. However, following a meeting in August 2016, and after sufficient backing had been secured from local enthusiasts to volunteer their services to make the 2017 event feasible, it was agreed unanimously that Gordon Forum for the Arts (GFA) would be kept in existence as an overarching organization. The 2017 Gordon Art Exhibition Annual General Meeting saw the election of a new Committee and a New Chair. Sadly the Gordon Forum for the Arts dissolved in June 2018. We must thank the Forum for continuing until 2017, after losing Council Funding in 2011.

The exhibition relies heavily on many volunteers to help mount and run the exhibition including such activities as receiving and returning art works before and after the opening, invigilating, running raffles and other jobs –please step forward if you wish to be involved.